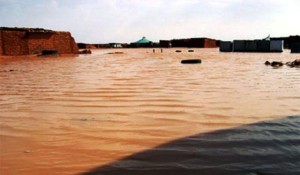 The dissident Sahrawi movement Khatt Achahid criticized the slow and inadequate response of Polisario leaders to the severe flooding in the Tindouf camps and called for the prosecution of these leaders for crimes against humanity.

Mahjoub Salek, a Sahrawi dissident and founder of the Khatt Achahid movement, painted a gloomy picture of the situation in the Tindouf camps, saying the situation got worse after the unusual torrential rains that flooded the camps lately.

He deplored the passive response of the Polisario to this new humanitarian tragedy at a time, he said, the separatist Front squanders millions of Algerian petrodollars to finance its leaders’ travel expenses or host foreign delegations in Rabouni in luxury ceremonies.

The Polisario leaders who are leading a very comfortable life in their air-conditioned villas in Algiers, Tindouf or Europe, ignore the dramatic situation of the populations they have been sequestrating for years, he said.

The leader of the Khatt Achahid movement said he is convinced that the head of the Polisario, Mohamed Abdelaziz, and his cronies will not hesitate to exploit the tragic situation in the camps to collect funds and humanitarian aid, which will not go to the flood-stricken populations, but will go, as usual, to their personal bank accounts.

The movement issued an urgent appeal to all international organizations, and in the first instance to the UN and its Secretary General, pointing out that “every day, every week, every month or year, spent by the Sahrawis in the Tindouf camps is a crime against humanity” and that these organizations, along with Algeria and the Polisario, “are held accountable for these crimes.”
In previous calls, Mahjoub Salek repeatedly urged the Polisario leadership to end the suffering of the inhabitants of the Tindouf camps and to consider the internal autonomy solution proposed by Morocco which is, he argues, “the only viable and credible proposal likely to put an end to this humanitarian tragedy.”