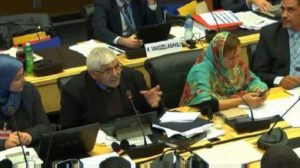 Algeria was once again harshly criticized on its human rights records during a debate held in Geneva Thursday, on the eve of the examination of this file by the UN Human Rights Council.

The debate on the crimes and abuses committed on Algerian soil was held as a coalition of NGOs presented a report on these abuses.

The NGOs coalition included the Sahara Observatory for Peace, Democracy and Human Rights (OSPDH), the Memory and Justice Association, and the International Committee of Victims of the Polisario (CIVOP).

Chairwoman of the OSPDH and coordinator of the coalition, Aicha Douihi, said the NGOs want to draw the attention of the Algerian government and the international community to cases of torture, abuses and forced or involuntary disappearances.

For his part, Stéphane Rodrigues, a lawyer at the Brussels Bar, focused his presentation on the large-scale diversion by the Polisario leaders and Algerian officials of the humanitarian aid destined to the Tindouf camps population. He mentioned in this respect the damning report of the European Anti-Fraud Office (OLAF) documenting the diversions.

He also raised the refusal of the Algerian regime and the Polisario to authorize a census of the Tindouf camps inhabitants to determine the exact number of the beneficiaries of the aid as recommended by the Security Council, in order, he said, to “stop such a loss of confidence”.

Speakers also raised the many cases of abuses against Moroccans, native of the Moroccan southern provinces, who are sequestered in Tindouf, as well as against Mauritanian nationals, who set up the “Memory and Justice” NGO.

The NGO asks for justice for the hundreds of Mauritanians, who have disappeared, been murdered or arbitrarily detained in Polisario jails. The NGO calls in this vein for the establishment of an international commission of inquiry, so that the abusers are held accountable for their crimes.