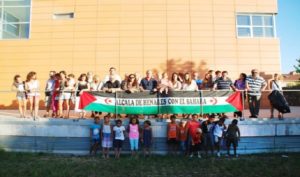 The Canary-Sahraoui Forum (Focasa), a Spanish NGO based in the Canary Islands, denounced the “immoral manipulation” of Sahrawi children during the summer holidays they spend in Spain for pro-Polisario propaganda and political purposes.

Scores of children from the Tindouf camps go to Spain for the summer holidays to escape temporarily the harsh conditions in the camps. However, the purpose of the holidays “has been gradually perverted for political purposes by the leaders of the Polisario” Focasa warns in a statement.

As soon as they arrive in Spain, these young children are forced to participate in marches and demonstrations across the country, brandishing Polisario flags and propaganda banners and chanting political slogans, instead of enjoying their time playing or engaging in learning activities.

As an instance, Focasa reported that “some host families took out the children on July 8 for a trip to a local park in Las Palmas, Canary Islands. It turned out that the trip was to attend a political meeting of the Polisario Front”.

The same thing happened in Seville, as children from the Tindouf camps were positioned in the front ranks of a propaganda march in favor of the separatist movement, deplored the Forum.

This is an “obscene and immoral manipulation of children”, Focasa said, deeming such an approach as “a crime and blatant violation of the rights of minors”.

The Forum also denounced the involvement of some Spanish host families in this strategy hatched by the Polisario.

This is not the first time that the Polisario uses young children to impose its diktat on the Sahrawi families sequestered in the Tindouf camps in the Algerian desert to reach its political purposes.

For years, young boys and girls were sent by the Polisario to Cuba, where they were indoctrinated and trained to firearms handling and guerrilla techniques. The parents could not leave the camps, as long as their children were exiled to Cuba.