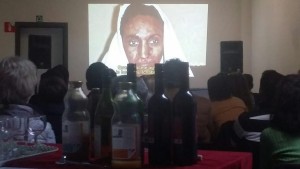 The Polisario has been at the center of a new scandal. At one of its meetings in Brussels last Tuesday, alcohol was flowing freely, at a time the leaders of the Separatist movement are claiming that starvation is threatening the Tindouf camps populations.

Pictures circulated on social networks show Polisario activists in Europe, supposedly members of an association of the Sahrawi community in Belgium, hosting a meeting on the occasion of the anniversary of the so-called Sahrawi republic. The meeting organizers and Polisario activists, however, did not skimp on resources. Alcohol was flowing freely.

This is just scandalous when we know that the leaders of the Algeria-backed Front last week launched an appeal for international humanitarian aid to the Tindouf camps population and deplored “the drying up of funds provided by international institutions.” The Polisario assessed emergency needs at $ 10 million to provide for “the strict food needs of the population.”

This new scandal broke out while the scandal of large-scale embezzlement of international humanitarian aid is still making the headlines. An investigation by OLAF, the European Anti-Fraud Office, had evidenced the direct involvement of Algerian and Polisario officials in these massive diversions.

Following the scandal, the European Parliament asked the European Union to condition its humanitarian aid to the holding of a census of the Tindouf camps population.

The initiative of the European Parliament intervened after the UN Security Council asked, in a resolution adopted late April, Algeria to allow the organization of a census in the Algeria-based Tindouf camps.