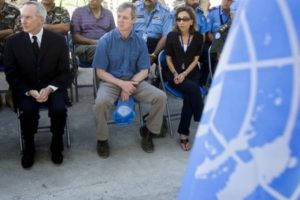 After the end of the mandate of the former UN Secretary General, the Korean Ban Ki-Moon, and the resignation of his personal envoy for the Sahara, Christopher Ross, on Wednesday November 1, it was the turn of the head of the MINURSO Canadian Kim Buldoc to leave the Moroccan Sahara for a new mission in Africa.

In a statement dated November 1, UNSG Antonio Guterres announced the appointment of Kim Buldoc as Deputy Special Representative for the UN Stabilization Mission in the Democratic Republic of the Congo (MINUSCO).

Before her transfer to the Congo, Buldoc had occupied, since 2014, the position of the UNSG’s Special Representative for Western Sahara and Head of the UN Mission in charge of monitoring the cease-fire agreement in the Sahara concluded in 1991.

Her mandate in the Sahara, however, was marred in 2016, by the crises of the expulsion of members of her mission and the arm-wrestling between Rabat and Ban Ki-Moon and his personal envoy Christopher Ross as well as by the dangerous confrontation between the Moroccan army and the Polisario armed militia at the Moroccan border post at Guergarate.

It was only after the coming to the helm of the UN of former Portuguese Prime Minister Antonio Guterress and after Christopher Ross was replaced by German Horst Köhler that calm was restored in Guergarate after Polisario militiamen were forced to withdraw from the area.

The new UNSG’s personal envoy for the Sahara, Köhler, who took office two months ago, has already made a first tour in the Maghreb, but he did not go to the Moroccan Sahara as his predecessor Ross used to do.

All eyes are now set on the new German mediator who is called to be neutral and imaginative to handle this thorny issue and reach a consensual political settlement.

Such a settlement will free the thousands of Moroccan Sahrawis who are sequestered against their will in the Tindouf camps and who have been used by the Algerian regime as a means of pressure against Morocco to achieve its hegemonic and expansionist ambitions and its geostrategic objectives.