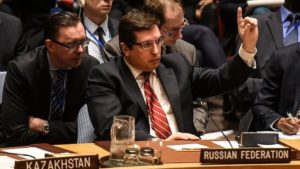 Russia has blocked at the UN Security Council the vote of the new resolution on the Sahara issue, initially scheduled for Wednesday (April 25), arguing that the draft resolution drafted by the US representation is not “balanced” and is more restrictive for the Polisario.

This move by Russia, a permanent member of the Security Council and one of the five member countries of the “Club of Friends of Western Sahara”, is explained rather by tensions between Moscow and Washington and its Western allies over various issues, on top of which the Syrian crisis and the alleged use of chemical weapons by Bashar al-Assad’s army.

After the Russian representation called for an amendment to the draft resolution before its adoption, the United States announced the postponement of the vote. The draft text provides, among other things, for the extension for one year of the mandate of the UN peace mission in the Sahara “MINURSO”.

Finally, the vote will take place on Monday, April 30, if the representations of the 15 member countries of the Security Council manage to settle their differences.

Russia’s last-minute turnaround can also be explained by the strong pressure exerted by Algerian diplomacy with the support of other backers of the Polisario’s separatist views.

It is in this context that Algerian Foreign Minister Abdelkader Messahel traveled to Moscow last February 18-19 to seek Russia’s diplomatic support for its separatist puppets ahead of the Security Council meeting.

And just last week, the Foreign Minister of Algeria, which continues to claim its neutrality in the Sahara conflict, separately handed to the ambassadors of the five permanent members of the Security Council as well as to the ambassadors of Saudi Arabia and the United Arab Emirates and to MINURSO Chief Colin Stewart, a report drafted in Algiers, on the situation in the Sahara buffer zone.

A copy of the same report, including photos recently taken by Algerian drones, was distributed to the fifteen members of the Security Council in New York, as revealed on April 20, by the independent information site “Middle East Eye.

Algerian diplomacy has taken advantage of the current climate of tension between Moscow and the major Western capitals to renew attacks against Morocco and its territorial integrity, hoping to score some points in the diplomatic battle where it suffered many a defeat.