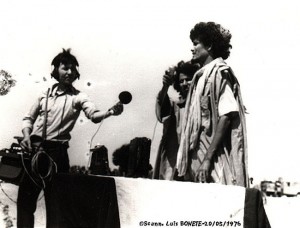 The veil is being lifted on the death of the founder of the Polisario, El Ouali Mostafa Sayed.
He did not die during clashes in Mauritania in 1976, as it was officially announced, but was killed by the Algerian intelligence services. His death was plotted and orchestrated by President Boumediene and his intimate circle that included Abdelaziz Bouteflika, Kasdi Merbah, who was at the time head of the intelligence services, Mohamed Messaadia, and Slimane Hoffman, during a meeting in the presidential palace in Algiers.
The information has just been published, 38 years after the mysterious conspiracy to eliminate the Polisario founder, who had announced his intention to negotiate with Morocco a solution to the Western Sahara conflict.
The revelations were made by “Akhbar Annass,” a Mauritanian E-Journal, which backed up the information by leaks from the archives of the Algerian military intelligence services after the assassination on Aug. 21, 1993 of Kasdi Merbah, who was Prime Minister of Chadli Benjdid.
El Ouali Mostafa Sayed lived in Taroudant, his hometown, Marrakech and Rabat, where he attended the Law School. He was in favor of dialogue with Morocco and wanted to break with the separatist strategy upheld by Boumediene and Libya’s Colonel Gaddafi.
Two months before his death, he told his companion Maa Al-Aïnine that he wanted to accelerate the normalization process with Morocco and that he was going to inform Messaadia, a member of the Algerian FLN Central Committee who was handling the Polisario dossier within the party, about his coming moves.
The leaks also reveal that a decisive meeting took place between the late leader of the Polisario and Yazid Zerhouni, second in command of the Algerian intelligence services few weeks after the Amgala battle. The Algerian army, which was openly involved in this battle that took place by the end of February 1976, had been defeated by the Royal Armed Forces and large number of Algerian soldiers was then taken prisoner. Yazid Zerhouni, a devotee to Bouteflika, was appointed Minister of the Interior after Bouteflika’s election in 1999.
The top secret meeting between Boumediene, Bouteflika, Messâadia, Slimane Hoffman and Kasdi Merbah was meant to plan the assassination of the Polisario founder as well as the reorganization of the Polisario structures. Only Kasdi Merbah was unwise enough to express reservations about this diabolical plan and to ask for a little more time to check whether El Ouali was really intending to get closer to Morocco.
Kasdi Merbah will pay the price of his reservations later!
Boumediene who insisted that the assassination operation takes place on Mauritanian soil ordered that a state funeral be held for El Ouali.
During the tope secret meeting, Slimane Hoffman presented a report on the Polisario leader’s rapprochement attempts with Morocco and made a presentation on tactics and procedures to eliminate El Ouali and replace him by Mohamed Abdelaziz Marrakchi, an obedient devotee to Algerian authorities.
Boumediene had reportedly instructed “General Manchot,” Aâttailia, a close “friend” of El Ouali Mostafa Sayed to kill the Polisario leader and to hold “national funerals for the martyr, killed on the battlefield!”