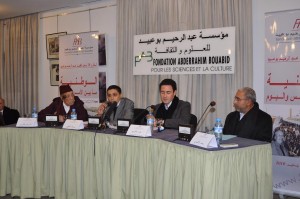 The President of the Abderrahim bouabid Foundation, Anas Chaoui, has called for a new management approach of the dossier of Morocco’s territorial integrity on the basis of the new realities in Western Sahara.
At a meeting on the Sahara issue, held Thursday in Rabat, to mark the 22nd anniversary of the death of the late socialist leader, Abderrahim bouabid, the Foundation president recommended that the available assessments on the situation in the Moroccan southern provinces as they came in the reports of the Economic, Social and Environmental Council, the National Human Rights Council or the Agency for the economic and social promotion of the southern provinces, should be exploited for the development of this new approach.
These assessments should be exploited in the context of the progress recorded by Morocco on the institutional level and in the context of the geostrategic changes taking place in the region, he said.
He also stressed the need to change the approach to the Sahara issue management, at both the internal and external levels, and to resort to constructive and frank dialogue in any evaluation of the situation in the region.
Anas Chaoui insisted that we should admit our mistakes and correct them, listen to others’ opinions and use appropriate arguments to strengthen our power of persuasion.
The former First Secretary of the USFP, Mohamed El Yazghi, on his part, deemed it necessary to uphold this national cause, to materialize the reforms introduced by the 2011 Constitution and use these reforms as a bulwark against the threats endangering the country’s territorial integrity.
He also underscored the need to work on the regional dimension by endeavouring for the establishment of the structures of the Arab Maghreb Union (AMU.)
At the international scale, El Yazghi said Morocco should make more efforts to “convince the public opinion (civil society) in several countries of the rightness of its cause, as  it succeeded to do with regard to their governments.”
He also renewed the call to conduct a census of the Tindouf camps population.
Former foreign minister, Saad El Dine Otmani, who was attending the meeting explained that opponents of Morocco’s cause, have, after they lost the political battle because of the weakness of their arguments and the soundness of the Moroccan autonomy proposal, transposed the Sahara conflict from a political field to other fields , including that of human rights.
This is one more reason why Morocco should focus on human rights promotion throughout the country in general and in the southern provinces in particular, Otmani said.