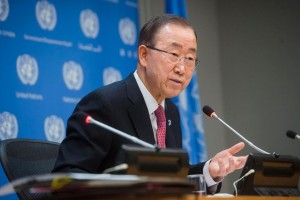 The Polisario and the Algerian media are unusually nervous and are blowing hot and cold, in a vain attempt to score points in the Western Sahara issue.

This agitation and the outburst of the Algerian media and the Polisario leaders against Morocco are triggered by the tour the UN Secretary General Ban Ki-Moon began Friday in the Maghreb region.

The Algerian media expressed monstrous, but unfounded, accusations against Morocco while the Polisario again brandished the threat to take up arms against Morocco and organized a military parade in the Algerian Sahara under the watchful eye of its mentor’s army and intelligence services.

The Sahrawi separatist movement also accused the UN of failing to find a solution to the territorial dispute over Western Sahara.

The objective of the Polisario’s threats and accusations and all the Algerian media campaigns is to pressure the UN chief, after their pressures on his personal envoy for the Sahara, Christopher Ross, failed.

Ross, a former ambassador of the United States to Algiers who knows the region very well managed, thanks to his diplomatic skills, to avoid falling into the trap of Algerian rulers and Polisario leaders.

Although he did not score any progress in the political settlement process of the conflict because of the intransigence of the Algerian regime, he nevertheless remained neutral, in accordance with the mission devolved to him by the UN, namely conduct mediation between the protagonists and try to bring their standpoints closer.

After Morocco presented its autonomy plan for the Sahara, the UN Security Council repeatedly called on the parties to the conflict to show “realism and a spirit of compromise “and adopt a” constructive position “to reach a final settlement of this regional conflict. The calls were never heeded by Algeria or the Polisario.