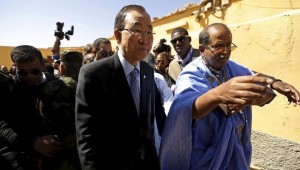 The Moroccan Government has denounced the diplomatic slipups and blunders of the UN Secretary General, Ban Ki-Moon, during his visit to the Tindouf camps and Algiers.

The UN chief has indeed acted as if he was remote-controlled by Algiers, during his trip and in his statements to the media.

When he visited a MINURSO base in Bir Lahlou, a Western Sahara buffer zone, Ban was accompanied by a Polisario executive, a move that is contrary to the neutrality and impartiality the United Nations official was supposed to observe.

He then held a meeting with the Polisario leaders around a table on which was put the banner of the UN side by side with that of “SADR,” a whimsical state never recognized by the UN.

And some of the UN Chief’s remarks to the press while in Algiers were an additional evidence of his partiality and bias. Ban Ki-Moon did not hesitate to speak of “fair and acceptable solution, based on the self-determination of the people of Western Sahara,” while the UN has ruled out long ago such an option because it is unworkable and difficult to implement on the ground.

To make things worse, the UN chief referred to the terminology usually used by Algiers and the Polisario when he spoke of “occupied Western Sahara” while the conflict is being addressed at the UN which has not yet issued any definitive ruling on it.

These diplomatic blunders, committed by the highest authority of the UN, have deeply angered authorities in Rabat.

In a statement released Tuesday evening, the Moroccan Government expressed amazement and anger at the verbal excesses, faits accomplis and unjustified complacency of Ban Ki-Moon.

The UN Secretary General “has disregarded his neutrality, objectivity and impartiality, and openly showed a shameful indulgence towards a puppet state, which does not fulfill the requirements of a State, does not have a territory, a population, nor a recognized flag,” the statement said.

The Moroccan government protests in the strongest terms against Ban Ki-moon and deems that “the use of such terminology has no political or legal basis and is an insult to the Moroccan Government and the Moroccan people,” the statement said, adding that “this kind of semantic misstep dangerously undermines the credibility of the United Nations General Secretariat.”