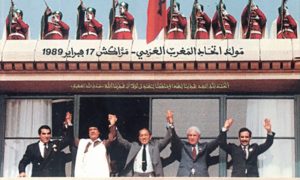 On the occasion of the 29th anniversary of the creation of the Arab Maghreb Union (AMU), Algerian President Abdelaziz Bouteflika sent a message to King Mohammed VI, as well as to the Presidents of Mauritania and Tunisia, in which he voices his country’s commitment to this Maghreb union.

In this message, the Algerian president reaffirms “Algeria’s constant commitment to the Arab Maghreb Union as a strategic choice and popular demand and its desire to reinvigorate its institutions and structures to defend shared interests, meet growing challenges and fulfil the expectations and aspirations of Maghreb peoples for greater unity, complementarity and integrity”.

This historic anniversary, he added, is “an opportunity to recall the relations of brotherhood, solidarity and good neighborhood linking Maghreb peoples… and their common destiny”.

Ironically, President Bouteflika sent his messages only to the heads of state of the three Maghreb countries, excluding Brahim Ghali who serves as president of the so-called Sahrawi republic “RASD” that Algeria created, in connivance with the Libyan regime, in the mid-seventies of the past century and that it has been supporting since then at the diplomatic, political and financial levels.

The launch ceremony of AMU in Marrakesh on February 17, 1989 was attended by the heads of state of the five Maghreb countries, namely Algeria, Libya, Mauritania, Morocco, and Tunisia. The pseudo SADR did not belong there.

The Algerian presidency is therefore called to choose between Morocco, a sovereign state with millennial history and whose borders extended to the Senegal River, and a puppet entity that has no history since it was created after the Green March that had ended the Spanish colonization of Western Sahara.

What is certain is that AMU cannot be brought back to life as long as the border between Algeria and Morocco remains closed (since 1994) and as long as the Algerian government has not stopped meddling in the Western Sahara issue, which should fall within the exclusive remit of the United Nations, commented a Western diplomat positioned in Rabat.