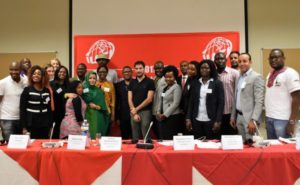 The delegation of the Chabiba ittihadie (socialist youth) of the USFP left empty-handed the 33rd Congress of the International Union of Socialist Youth (IUSY), held on February 16-17 in Becici in Montenegro.

Not only did the delegation members of the Socialist Union of Popular Forces (USFP) of Driss Lachgar get nothing at the congress, but they remained idle while the Polisario delegation tried to score points.

The Polisario delegation also kept the position of vice-president of the International Union for the fourth consecutive year, in the person of Aminatou Larabas Souidate.

Yet, the USFP was well aware of the existence of a draft entitled “Western Sahara: the last colony in Africa”, that the Polisario delegation submitted to the IUSY Congress to be included in its final communiqué.

The Chabiba Ittihadie delegation could have saved face if it had at least demanded that the Polisario document be amended. But it did nothing, except playing the role of a passive actor.

Days after the Becici meeting, the USFP and its Secretary General Driss Lachgar did not say a single word about this bleak failure.

Several voices are rising in Morocco demanding the replacement of the USFP youth by another national socialist group liable to defend the country’s national causes.